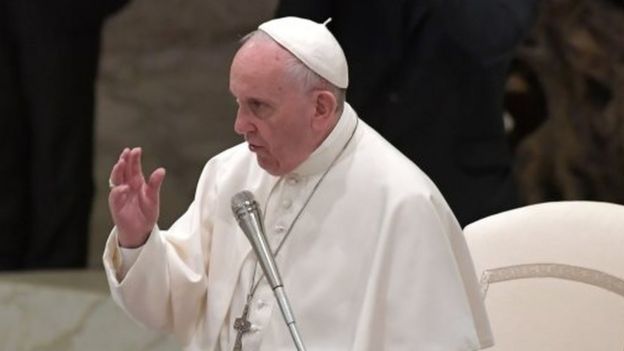 Pope Francis has criticised the naming of the US military’s largest non-nuclear explosive ever used in combat as “the mother of all bombs”.

“I was ashamed when I heard the name,” the pontiff told an audience of students at the Vatican.

“A mother gives life and this one gives death, and we call this device a mother. What is going on?” he asked.

Last month the US dropped such a bomb, which weighs 21,600lb (9,800kg), on Islamic State militants in Afghanistan.

The Pentagon said it was dropped from a US aircraft in Nangarhar province, targeting tunnel complex used by IS.

The explosive is officially called the GBU-43/B Massive Ordnance Air Blast Bomb (MOAB), but is widely known as “the mother of all bombs”.

It was first tested in 2003, but had not been deployed in combat before.

The Pope’s comments come ahead of his meeting with US President Donald Trump on 24 May.