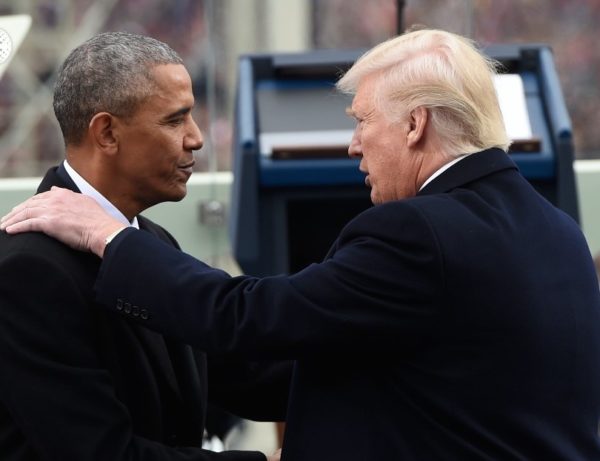 US President Trump is fond of comparing himself to Barack Obama, describing how he is stronger, and generally better than his predecessor.

But when it comes to signing guest books, Mr Trump may decide it’s better to cede the field.

Social media users seized on a 19-word, mixed-capitals note that Mr Trump left at Israel’s Holocaust memorial and compared it to a much longer, more thoughtful note written by Barack Obama.

“IT IS A GREAT HONOR TO BE HERE WITH ALL OF MY FRIENDS – SO AMAZING AND WILL NEVER FORGET!” Mr Trump wrote at Yad Vashem on Tuesday after laying a wreath in memory of the six million Jews killed by the Nazis.

The note was immediately compared to an entry by Mr Obama from July 2008.

“I am grateful to Yad Vashem and all those responsible for this remarkable institution. At a time of great peril and promise, war and strife, we are blessed to have such a powerful reminder of man’s potential for great evil, but also our capacity to rise up from tragedy and remake our world.

“Let our children come here, and know this history, so that they can add their voices to proclaim ‘never again’. And may we remember those who perished, not only as victims, but also as individuals who hoped and loved and dreamed like us, and who have become symbols of the human spirit.”

The stark differences in the entries reflect the literary tastes of the two presidents.

Mr Obama is an avid reader who wrote several books and enjoyed long dinners with novelists and other artists to talk about their work.

Mr Trump rarely reads book and prefers to watch television. His bestselling book The Art of the Deal was written by a ghostwriter.

Former US first lady Michelle Obama and Barack Obama were spotted in Siena, Tuscany, on Monday and the former first lady looked beautiful in a flirty white top that showed off her toned shoulders and arms. The couple arrived Italy for their vacation on Friday with six fighter jets

Michelle paired her top with a high-waisted khaki-colored pants then completed her glamorous look with gold jewelry and sunglasses. Obama looked laid back in a blue shirt with the sleeves folded and hid his eyes behind dark sunglasses.

The crowd went wild when they spotted the former President and his first lady and they screamed in pleasure, calling out to Obama with his former title; “President Obama”. 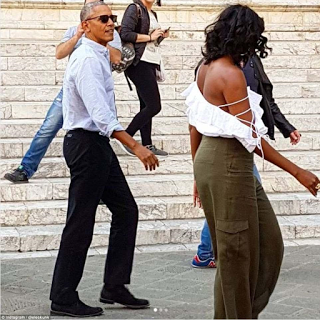 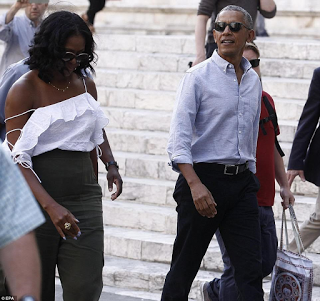 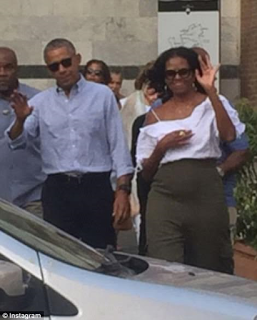 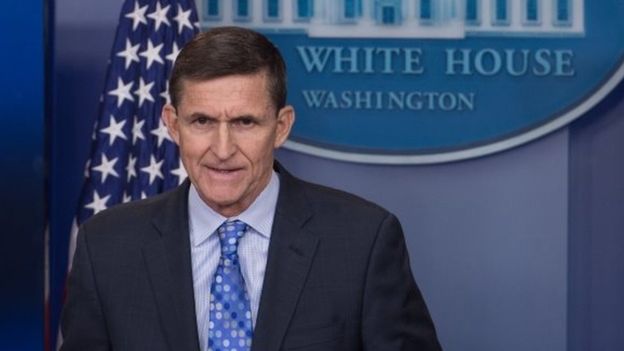 He warned his successor less than 48 hours after the November election during a conversation in the Oval Office, former Obama officials said.

Mr Flynn’s contacts with a Russian envoy left him vulnerable to blackmail, a Senate panel heard on Monday.

He was fired in February for concealing the nature of these contacts.

Mr Flynn, a retired army lieutenant-general, misled the Trump administration about discussing US sanctions against Russia with the country’s envoy, Sergei Kislyak, before the inauguration.

White House press secretary Sean Spicer told the daily briefing on Monday: “It’s true that President Obama made it known that he wasn’t exactly a fan of General Flynn’s.”

But Mr Spicer said that should not come as a surprise “given that General Flynn had worked for President Obama [and] was an outspoken critic of President Obama’s shortcomings specifically as it related to his lack of strategy confronting Isis and other threats around that were facing America”.

The Obama administration fired Mr Flynn from his role as head of the Defense Intelligence Agency in 2014, citing issues of mismanagement and temperament.

The Democratic president reportedly thought Mr Flynn was not suited for such a high-level position. 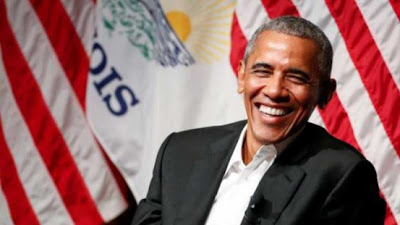 Former U.S. President Barack Obama is expected in Boston on Sunday to receive the John F.

Kennedy Foundation’s annual “Profile in Courage Award,” honoring his accomplishments during his two terms in office in the face of intense political opposition.

“President Kennedy called on a new generation of Americans to give their talents to the service of the country,” said Caroline Kennedy, John F.
Kennedy’s daughter, will present the award at a ceremony .

“With exceptional dignity and courage, President Obama has carried that torch into our own time, providing young people of all backgrounds with an example they can emulate,” Kennedy said in a statement.

She served as U.S. ambassador to Japan during the Obama administration.

US President Donald Trump has declared Obamacare “dead” after the Republican healthcare bill was narrowly passed by the lower chamber of Congress.

The 217-213 vote marked his first legislative victory and goes some way to keeping a key campaign promise to roll back his predecessor’s law.

The bill now heads to the Senate, where Republicans have indicated they will cast it aside and write a new law.

Protesters shouted “Shame on you!” as lawmakers left Capitol Hill after the knife-edge vote.

But there were celebrations moments later on the White House lawn, where the president laid on a reception for Republicans in the House of Representatives.

Six weeks ago, their healthcare attempts appeared doomed when they did not have enough support to have a vote.

But that bill has undergone several revisions to satisfy both the conservative and moderate wings of the Republican party.

“Make no mistake, this is a repeal,” said a triumphant Mr Trump in the Rose Garden. Obamacare, he added, was “essentially dead”.

The Democrats think the effect of this bill would be the opposite, stripping insurance from the poor, giving tax breaks to the wealthy and casting doubt on health provisions for the chronically sick.

“Thousands of Americans would die because they would no longer have access to care,” said Senator Bernie Sanders.

roups representing hospitals and doctors have also expressed concerns about the Republican plan, which they say has yet to be properly assessed.

The ill-fated Republican bill in March would result in 24 million more Americans losing insurance within a decade, the nonpartisan Congressional Budget Office said at the time. 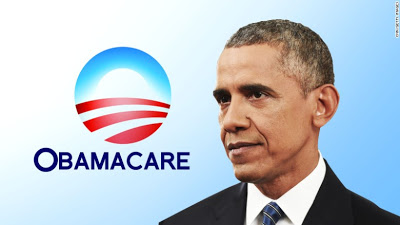 According to CNN, President Donald Trump has finally won. The House today voted to repeal and replace the Affordable Care Act, also known as the ObamaCare.

The bill now heads to the Senate where it faces daunting challenges because of the same ideological splits between conservative and moderate Republicans that nearly killed it in the House.

Trump said he is confident the bill will pass the Senate, calling Obamacare “essentially dead.”

“This is a great plan. I actually think it will get even better. This is a repeal and replace of Obamacare. Make no mistake about it,” Trump said at a celebratory White House appearance with House Republicans.

After a dramatic week of negotiations, lobbying from Trump and Republican leaders, the vote ended with 217 GOP lawmakers backing the measure. Twenty Republicans opposed it, as did all House Democrats.

Democrats were unable to stop the GOP vote aimed at President Barack Obama’s signature legislative achievement. But after the final vote was cast, they chanted “nah nah nah nah hey hey hey goodbye” to their Republican colleagues, with a few members waving, as they believe the vote will lead to many GOP lawmakers losing their seats in the November 2018 midterms.

Thursday marks a political milestone — one that has painfully eluded Trump and House leaders for months. The controversial health care bill delivered Trump the biggest political defeat of his short presidency in March, when the legislation had to be yanked from the House floor because it simply didn’t have enough support.

The US House of Representatives will hold a vote on Thursday on a revised healthcare bill that Republicans hope will replace Obamacare.

House Majority Leader Kevin McCarthy said the leadership in the party is confident it has secured enough votes for the bill to pass.

It would then go to the Senate where it could face a more tricky passage.

President Donald Trump made the repeal of his predecessor’s signature law a central campaign promise.

He has played a personal role this week in persuading wavering Republicans to come on board.

Their first attempt at getting a healthcare bill collapsed in disarray in March, despite the party controlling both legislative chambers and the White House. 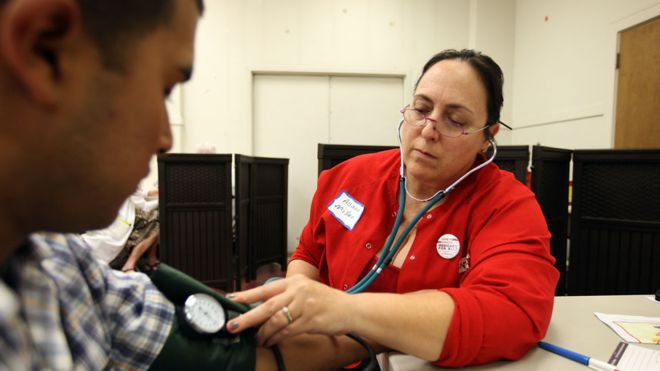 But several key Republicans this week reversed course, partly due to an amendment by Congressman Fred Upton to provide $8bn (£6.2bn) over five years towards coverage for sick people.

But Democrats said the amount was woefully inadequate.

Senate minority leader Chuck Schumer said: “The Upton amendment is like administering cough medicine to someone with stage four cancer.”

Members of the House Freedom Caucus, a group of ultraconservative lawmakers, indicated the Upton amendment would not be a deal-breaker for them.

In March, the nonpartisan Congressional Budget Office said 24 million people would lose health insurance under the bill, which is called the American Health Care Act.

According to an internal memo, the “Let Girls Learn” program, which she started in 2015 to facilitate educational opportunities for adolescent girls in developing countries, will cease operation immediately. While aspects of the initiative’s programming will continue, employees have been told to stop using the “Let Girls Learn” name and also that as a program unto itself, “Let Girls Learn” was ending.

An email sent to Peace Corps employees this week by the agency’s acting director Sheila Crowley reads,
‘Moving forward, we will not continue to use the ‘Let Girls Learn’ brand or maintain a stand-alone program. The  program provided a platform to showcase Peace Corps’ strength in community development, shining a bright light on the work of our Volunteers all over the world. We are so proud of what ‘Let Girls Learn’ accomplished and we have all of you to thank for this success’. 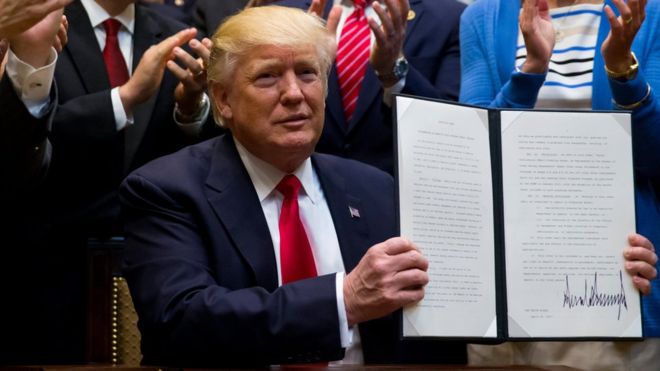 According to BBC News, the US president has signed an executive order aimed at reducing restrictions on oil drilling in the Arctic and Atlantic in order to “unleash American energy”.

Donald Trump said it would create “thousands and thousands” of jobs, despite a downturn in the oil market.

It could undo a ban put in place by Barack Obama in order to protect swathes of the ocean from development.

But Interior Secretary Ryan Zinke said the decision was better than being held hostage by “foreign entities”.

Getting rid of Mr Obama’s environmental protections was one of Mr Trump’s promises to voters while on the campaign trail.

As he signed the order, called the America-First Offshore Energy Strategy, Mr Trump said: “Our country’s blessed with incredible natural resources, including abundant offshore oil and natural gas reserves, but the federal government has kept 94% of these offshore areas closed for exploration and production.

“This deprives our country of potentially thousands and thousands of jobs and billions of dollars in wealth.”

The order instructs the US Department of Interior to come up with a new development plan for all federal waters off US coasts.

It is debatable how much income might be generated by a reversal of Mr Obama’s order. Worldwide prices for oil have dropped in recent years, with a review by news agency Reuters finding the amount of money oil companies spent in the central Gulf of Mexico’s annual lease sale dropped by more than 75% between 2012 and 2017.

David Jenkins, president of Conservatives for Responsible Stewardship, a non-profit conservation group, said: “The Trump administration’s hasty move today toward expanding offshore oil drilling … defies market realities and is as reckless as it is unnecessary.”